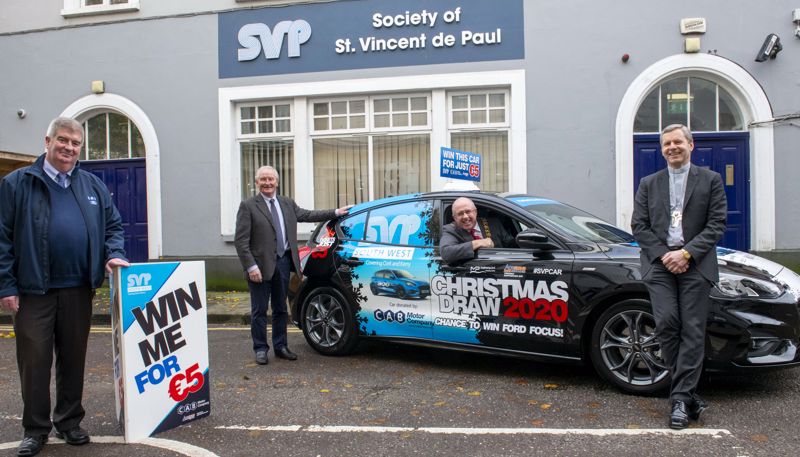 This year due to Level 5 restrictions the decision has been made to postpone the Annual Car Draw due to take place today, the 7th of January, in our showrooms. The new date for the draw to take place is the 10th of February. See full details below on the success of this years appeal.

St Vincent De Paul - South West has paid tribute to the public for its “phenomenal” support of its annual Car Draw in association with CAB Motor Company.The charity revealed that in excess of €260,000 was raised following an urgent appeal for funds from the charity in November.SVP South West said that the fundraising total is “significantly more” than the 2019 figure of €188,000 and they were humbled by the generosity of the public in such difficult times.South West Regional President Paddy O’Flynn said the much-needed funds would “go a long way” to assisting struggling families in the region:“We’ve always had extremely generous support for our annual car draw from the people in Cork and surrounding areas. We made no secret of the fact that this was going to be an unprecedentedly difficult year for us in terms of fundraising as a result of COVID-19 and people came out in their droves to support us - it was a huge success.“We are eternally grateful to everyone who pledged their support to this year’s car draw. The money raised will enable us to continue supporting those in need during these extremely challenging times. Once again, I would like to extend a sincere and heartfelt thank you to everyone who donated or bought raffle tickets for our car draw, and also a huge thank you to our sponsors CAB Motor Company for their continued support,” he said.This year’s car draw was due to take place on January 7th. Due to current level 5 pandemic restrictions, SVP South West have made the decision to postpone the draw to the 10th of February 2021.Mr O’Flynn said that all ticket sales have now been closed as planned.“We hope that the public will understand that it just isn’t feasible to hold the draw in the current climate. As a charity working closely with some of the most vulnerable people in society, we prioritise the health and safety of others and we feel it is best to postpone the draw for a couple of weeks. We look forward to giving the keys of the brand-new Ford Focus St Line from CAB Motor Company to the lucky winner.”